The history of dolphins in Montreal 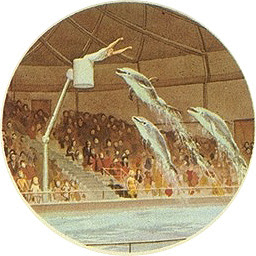 So why does Montreal have no big aquarium where people can swim with dolphins, as they do in other cities?
Here's a splishy-splashy deconstruction of the watery history of such local establishments.
The Montreal Aquarium, also known as the Alcan Aquarium was built on St. Helen's Island for Expo 67, it was run by New Yorker Joseph Geraci.
After Expo, Drapeau didn't much care about the city aquarium. Much of top brass quit in 1975 as and the city didn't replace them. It hit the skids.
On 12 February 1980, the blue collar workers went on strike. The six people who took care of the dolphins refused to feed the lovable rascals. On May 21, 1980 Brigitte, 20, died of starvation and dehydration. She was three months pregnant.
A few hours earlier Fanny, another star dolphin attraction died in a similar fashion as did Judith. 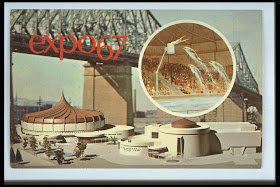 Aquarium management had tried on four occasions (17 January, 7, 14 February and 4 March) to demand the City of Montreal intervene and save the dolphins. The help came too late.
Geraci told La Presse at the time, "The animals were in their natural habitat. When we bring them into captivity the least we can do is to take care of them. It's a shame to let them die of hunger. I've never seen people who take care of animals going on strike and allowing them to die of hunger at their cost. What they need is affection and devotion."
The three surviving dolphins, Pierrot, Kim and Carole were brought in flying hammocks to the Flipper Sea School in Miami. There was no more talk of dolphins in Montreal for a long time.
The Montreal Aquarium was doomed in 1988 when the gov't hired François Doumenge from Paris, Theodore Reed from Washington, Greg Tarry from Calgary and Lorne Rendor from Toronto to analyze some of our facilities.
Their report slammed our beloved aquarium. It criticized the location on St. Helen Island and complained that there wasn't enough educational angle or research being done there.
On 30 September 1988 the federal government vowed to give $100 million to move the aquarium to a new facility at the Old Port.The plan included the building of a science museum and a marine museum and a the transfer of the train museum from St. Constant, as well as the aquarium. A new marina, a 120 hotel room hotel and 1,200 apartment or condo units would also be built. They wanted $250 mil from the private sector, $130 from the feds for this $480 mil project. They were anxious to get it done before 1992, the 350 th birthday of Montreal. It never happened, 1987 were bubbly times of optimism but by 1992 the city was mired in a major recession.
In August 1989 authorities announced that the Velodrome would become a zoo, with an aquarium, known as the Biodome. They were planning to pop big mammals in there, such as three beluga whales. But in July 1990 an international symposium in Geneva denounced the usage of such prisons for whales and dolphins.
So then on 15 September 91 the Montreal aquarium closed. Most of the fish were brought to the Biodome, but officials killed four sharks, one by banging it on the head with a sledgehammer.
Others have since wanted to build another aquarium. In June 2000, Canadian billionaire Jim Pattison, of the Ripley's Aquarium again announced that it would build a 100,000 square foot aquarium with $90 mil of its own money in the Old Port. They denied that it would undermine the Biodome because, as one of their officials cattily put it, unlike the Biodome, they'd have tens of thousands of fish.
Then in January 2001, the Granby Zoo promised a $50 million aquarium in Montreal either near the Biodome, St. Helen's Island or the Old Port. Granby Zoo's boss, Bernard Ricard claimed that three American companies were seeking to build an aquarium in Montreal, "why let the Americans do it?" he asked reporters. He then shifted his intentions of building the Delphinarium to Granby. Of course this never got built.
The usual animal rights/welfare types jumped in to denounce the cruelty of keeping such fish well-fed in safe waters. In July 2001 SPCA's Pierre Barnoti denounced the idea of swimming with dolphins as cruel. (One could argue that it's cruel to deny people the chance to swim with dolphins as well, but who cares about people these days?) He also suggested that it would be unhygienic to allow people to swim in waters that dolphins had pooping and peed in. (Dolphin diapers anyone?) Zoocheck Canada, whatever that is, said something similar and they continue to denounce the other places where dolphins swim in captivity in Canada, like Marineland and the Vancouver Aquarium.
Some argue that swimming with dolphins is a good therapy for such people as autistic children. But Dr. Pierre Beland denounced the project to La Presse, "why not have programs to have children walk with giraffes or sleep with gorillas? It's too dangerous." Not sure what his point is, but it's pretty funny stuff.
Coolopolis Montreal at 12:05 am